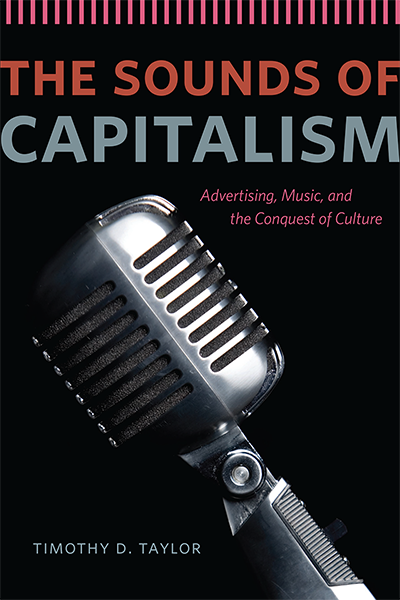 From the early days of radio through the rise of television after World War II to the present, music has been used more and more often to sell goods and establish brand identities. And since at least the 1920s, songs originally written for commercials have become popular songs, and songs written for a popular audience have become irrevocably associated with specific brands and products. Today, musicians move flexibly between the music and advertising worlds, while the line between commercial messages and popular music has become increasingly blurred.

The Sounds of Capitalism is the untold story of this infectious part of our musical culture. Here, Timothy D. Taylor tracks the use of music in American advertising for nearly a century, from variety shows like The Clicquot Club Eskimos to the rise of the jingle, the postwar rise in consumerism and the more complete fusion of popular music and consumption in the 1980s and after.

Taylor contends that today there is no longer a meaningful distinction to be made between music in advertising and advertising music. To make his case, he draws on rare archival materials, the extensive trade press, and hours of interviews with musicians ranging from Barry Manilow to unknown but unforgettable jingle singers. The Sounds of Capitalism is the first book to truly tell the history of music used in advertising in the United States, and an original contribution to this little-studied part of our cultural history.

In The Sounds of Capitalism, Timothy D. Taylor presents a rich and compelling story about music’s emergence within the broad fields of US advertising and consumer culture…

King of the Jingle

Today, in a business where everyone knows everything, Timothy Taylor has written a scrupulously researched, thoroughly enjoyable history of the wild world of advertising music. The Sounds of Capitalism is the engrossing…

Timothy D. Taylor is an outstanding presence in cultural studies. Lively, thoroughly researched, rigorously theorized, and filled with both political edge and joyous stylishness, The Sounds of Capitalism is another triumph…